Pine regulation with the bionator

Malocclusions have many causes. These range from general postural disorders to emotional and psychological stress factors, which include, for example, sucking your thumb at the age of up to eight years.

The treatment of malocclusions

Is done with the help of so-called removable and / or fixed appliances on or on the teeth.

These devices behave either as an “active” device with respect to the teeth, ie they emit a force set by the dentist that influences the correspondingly incorrectly positioned teeth or jaws. Treatment devices that build up this active force development are available both in a variant that can be removed for the patient (eg so-called active plates, Crozat devices, etc.) or as a fixed variant that can not be independently removed by the patient (eg the multibracketts or multiband, Etc.).

When it comes to regulating tooth misalignments, only removable orthodontic appliances are used in practice. Mostly I work with the so-called BIONATOR after Prof. Balters.

The human skull does not consist of a single but a total of 27 bone parts. These are interconnected by tiny oppositely moving crevices and allow, among other things, the skull bone in normal delivery (i.e., without cesarean section) to pass through the narrow birth canal of the female pelvis. 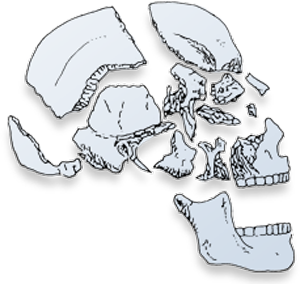 The cranial bones “breathe,” i. they move rhythmically, as well as breathing or heartbeat, but with an individually different frequency of about 5-14 times a minute. This rhythmic movement results from a contraction and expansion of the four large cerebral fluid chambers.

The fixed orthodontic appliances (MULTIBAND or MULTI-BRACKETT) on the teeth, especially in the upper jaw, cause a blockage of the cranial bone parts and thus »cranial respiration«.

Other so-called functional devices such as the BIONATOR or similar BIONATOR related devices can be removed from the patient.

The BIONATOR in the mouth in the model example:

With this removable device, the individual dynamic power of the oral systems is used to regulate the position of the teeth, and no mechanical forces are generated from the device to the teeth, such as with fixed devices that can block “skull breathing”.

This website uses cookies to improve your experience while you navigate through the website. Out of these, the cookies that are categorized as necessary are stored on your browser as they are essential for the working of basic functionalities of the website. We also use third-party cookies that help us analyze and understand how you use this website. These cookies will be stored in your browser only with your consent. You also have the option to opt-out of these cookies. But opting out of some of these cookies may affect your browsing experience.
Necessary Always Enabled
Necessary cookies are absolutely essential for the website to function properly. This category only includes cookies that ensures basic functionalities and security features of the website. These cookies do not store any personal information.
Non-necessary
Any cookies that may not be particularly necessary for the website to function and is used specifically to collect user personal data via analytics, ads, other embedded contents are termed as non-necessary cookies. It is mandatory to procure user consent prior to running these cookies on your website.
SAVE & ACCEPT